/ About Us / Lawyers / Niall Hearty

Niall is known for his in-depth corporate crime expertise. That expertise is reflected in his achievements to date and the demand for his services.

Niall’s ability, backed with his experience of running a City firm’s business crime and fraud department, has helped make him a logical choice to lead complex and multi-jurisdictional investigations. His knowledge of cross-border and global business crime cases and the successes he has obtained for clients mean he has an impressive track record and have led to him being highlighted in the latest edition of The Legal 500 international legal guide.

His skill in coordinating bribery and corruption cases that span the globe, his achievements in cases involving agencies such as the Financial Conduct Authority (FCA) and his ability to recognise the very best route in the most complex of investigations have made him a solicitor who is popular with corporate clients.

He has brought judicial reviews against enforcement agencies and has also successfully challenged search warrants obtained by them.

His notable victories have led to Niall also being in demand from senior business figures, high net worth individuals and CEOs for cases that involve reputational issues in relation to general and serious crime allegations.

His caseload will, at any particular time, involve a variety of high-profile, high-stakes cases. Niall’s experience covers the full range of major fraud cases, from workplace and financial fraud through to the most complicated investment fraud schemes. He is also adept at managing the most involved money laundering, proceeds of crime and serious crime investigations and has had success in major conspiracy cases.

His dogged pursuit of the facts and his ability to use both evidence and legal argument to robustly challenge prosecutors’ claims are why he is sought by senior business and financial figures who are facing investigation by the likes of the NCA, FCA, Serious Fraud Office (SFO), the City of London Police and police regional organised crime units.

His client care is second to none. His integrity and understanding of the environment of white-collar crime is impressive.

One of the most diligent and able solicitors around.

With the Law Commission having produced options for changing corporate criminal liability, Niall Hearty wrote a piece examining the need for reform.

The next head of the Organisation for Economic Cooperation and Development’s (OECD’s) working group on bribery wants to speed up the process for states sharing information.

With the government having announced the creation of the Public Sector Fraud Authority, Niall Hearty wrote an article about the challenge it faces.

The panel will analyse a range of significant issues currently facing the SFO and, in some cases, its European counterparts. 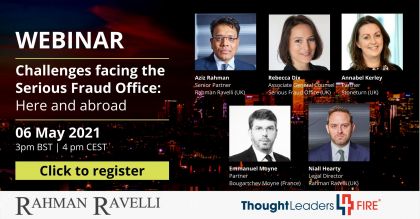 Preparing for a Dawn Raid: The Importance of the Right Response

Niall Hearty of Rahman Ravelli explains how careful planning can reduce the effect of a raid on a business.

The government responds to Treasury Committee recommendations regarding economic crime

Niall has a wealth of corporate crime expertise and an ability to coordinate global bribery and corruption cases. His achievements in such investigations have made him a logical choice for corporate clients.