/ Legal Articles / SPACs, The FCA's New Rules and The Banks

SPACs, The FCA's New Rules and The Banks

It came as little surprise that the Financial Conduct Authority (FCA - the regulator within the UK's financial services sector) was prepared to change its regime to help the UK attract some of the billions that are being invested in the growing special purpose acquisition companies (SPACs) market. It could see that there would be benefits in making changes that would provide an incentive for SPACs to come to the City, rather than go to other places whose listing rules are more welcoming to them.

SPACs (sometimes referred to as blank cheque companies) involve money being raised from investors who are told that the purpose is a business combination, to merge with a private company. At present, almost half of the money raised around the world for new listings is being placed in SPACs, and this is largely due to the fact that it can bring swifter returns for investors than more conventional company acquisitions.

Under a traditional initial public offering (IPO), a company is audited, files a registration statement with the appropriate exchange commission and arrangements are then made to list its shares on a stock exchange. A SPAC, however, is created by a team of investors in order to acquire another company. Once incorporated, the SPAC undertakes an IPO and its shares are listed on a public stock exchange. A SPAC has no commercial operations and no assets other than the money it raises through the IPO, which is placed in an account until those running it identify a private company to be acquired.

In announcing its proposed rule changes on 30th April 2021, the FCA said that it required additional safeguards for investors in SPACs. These proposed safeguards included allowing investors to exit a SPAC before any acquisition was completed, ensuring money raised from public shareholders was ring-fenced, shareholder approval being required for any proposed acquisition and a time limit being set on a SPAC’s operating period if no acquisition is completed.

Any SPAC issuers that were unable or unwilling to meet the conditions were to continue to be subject to a presumption of suspension.

On receiving feedback on its proposals, the FCA made alterations to its draft rule changes.

The main changes were: 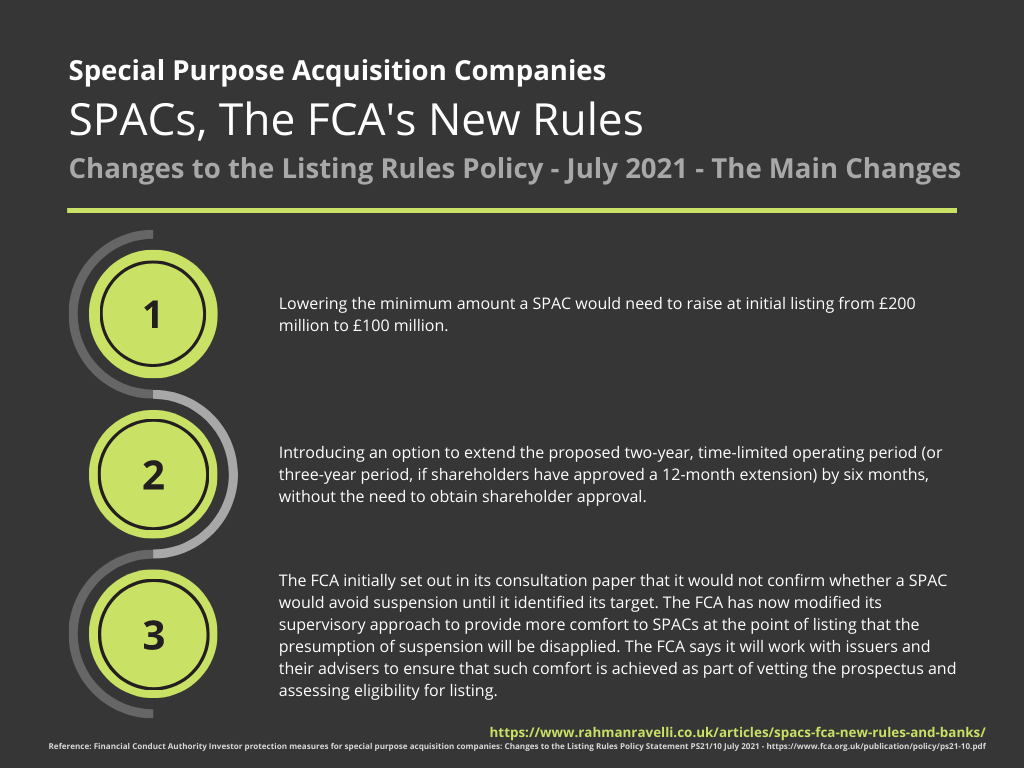 The final rules have been introduced to give larger SPACs more flexibility, providing they contain features that, as the FCA said, “promote investor protection and the smooth operation of our markets.[1] Private companies listing in the UK via a SPAC will still be subject to the full rigour of the FCA’s listing rules and transparency and disclosure obligations. In introducing its new measures, the FCA has attempted to both make the UK attractive to SPACs while also devising measures to protect those who invest in them.

The FCA is emphasising that risks will still be associated with SPACs, as they are often a complex investment. Issues such as their capital structure, likely returns, possible conflicts of interest among those involved and dilution of shares allocated to sponsors should all be examined in detail before placing funds in a SPAC.

But while these are all, arguably, investor issues, the rule changes will certainly have an effect on the banking world. That effect is set to be a beneficial one, if and when SPACs do arrive in numbers in the UK. Banks could earn billions of pounds in fees for setting up SPACs.

Investment banks are generally in a good position to help find buyers for a SPAC’s shares and, in return, they would typically receive a commission based on the money raised for the initial listing. They would also receive commission when the SPAC completes its deal with the target company.

One issue that could be advantageous for banks is that the FCA’s changes do not exclude them from advising on a SPAC’s listing. Paragraph 2.16 of the FCA proposal states that such an advisor should be an appropriate independent third party and adds that this “would not necessarily exclude banks or other companies with which the SPAC has an existing affiliation or service relationship.”[1]

When the FCA put its proposals out for consultation, the point was raised that maybe a fair and reasonable statement should be published to shareholders - based on advice from an appropriately qualified and independent adviser - when any of the SPAC’s directors have a conflict of interest in relation to the acquisition target or its subsidiary.

The FCA response included reference to investment banks being an appropriate adviser in such circumstances. It certainly appears, therefore, that banks are in an ideal position to gear themselves up for a slice of the SPAC advisory work as it becomes available.

The FCA has taken action to attract SPACs and offer protection to those investing in them. Both aspects of the FCA’s action look set to bring benefits to the banking world. But the point needs to be made that while there are clearly benefits available to banks as a result of the action that the FCA has taken to attract SPACs, this should not be seen as the regulator dropping its guard.

While it has taken significant steps to make the UK more SPAC-friendly, it will certainly be looking carefully at filings by both SPACs and the companies they line up as acquisition targets.

It would not be surprising if the FCA, at some point in the near future, set up a compliance department to deal with reviews and filings. Such a department would be of value to all parties with connections to SPACs. The FCA could seek more clarity on disclosure while also providing guidance to both registrants and the public.

Any disclosure should be focussed on key areas such as:

There is little doubt that the FCA will be attentive when it comes to SPACs and the private target disclosure. It is part of the FCA’s remit to ensure that anyone who is considering investing in a SPAC (or any kind of financial investment vehicle) has all the information that they need in order to be able to commit their money with a full awareness of what they are entering into.

While there has been no shortage of investors who assert that the advantage of SPACs over traditional IPOs is the possibility of less regulatory scrutiny, this may well be a misinterpretation of the exact situation. While it is inarguable that SPACs do offer a swifter route to possible gains than a company acquisition that is conducted in the more conventional manner, this – in the UK, at least – looks unlikely to mean that such activity goes unchecked.

The FCA has certainly introduced changes that it hopes will lure some of the billions generated by SPACs to the UK. For now at least, that does not appear to have been done at the expense of investor protection.