/ Events / The Cum-Ex Scandal: Will US Prosecutors Elbow In To Europe’s Greatest Tax Fraud? 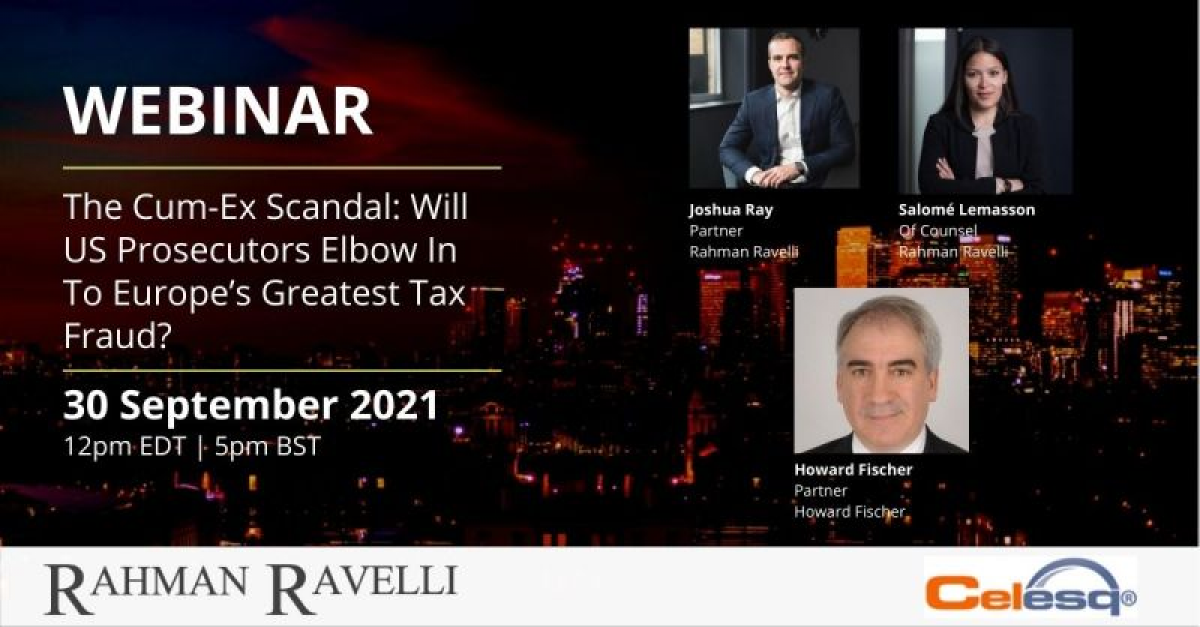 Rahman Ravelli’s Joshua Ray and Salomé Lemasson are to be speakers on a live US-UK webcast about investigations into the controversial share selling practice Cum-Ex.

The two have been invited to take part in “The Cum-Ex Scandal: Will US Prosecutors Elbow Into Europe’s Greatest Tax Fraud?’’. They will join former US Securities and Exchange Commission senior trial counsel and Moses Singer Partner Howard Fischer in recording the webcast at 12pm Eastern Daylight Time (5pm in the UK) on September 30.

Tens of billions of dollars have been lost In Europe to Cum-Ex, which saw shares bought and sold in a way that enabled more than one party to claim tax rebates. The three speakers will assess the possibility of US authorities becoming increasingly involved in Cum-Ex investigations.

With a new government in power in the US and more aggressive prosecutors taking positions in the country’s agencies, the webcast will assess the likelihood of Cum-Ex attracting more attention from the authorities on the other side of the Atlantic.

The webcast will also explain the history of the Cum-Ex scandal and how it arose and will outline some of the possible consequences of increased US involvement. It will also detail the issues that US agencies are likely to focus on in any future Cum-Ex investigations and set out the risk factors that financial firms and counsel need to know about.

The "The Cum-Ex Scandal: Will US Prosecutors Elbow In To Europe’s Greatest Tax Fraud?" event happened 4 months ago, 30 September 2021.

A team of first-class lawyers with experience and expertise. A strong, bright, proactive and diligent team
The Legal 500