Enforcement and prosecution agencies are making increasing use of their civil recovery powers. Those facing such action must seek advice from those who know about this demanding area of law.

Civil recovery is a High Court civil action – as opposed to a criminal action - brought under Part 5 of the Proceeds of Crime Act, where the authorities seek to seize the assets of a company or an individual that they believe to be the proceeds of crime.

It is increasingly popular with enforcement and prosecution agencies. This is due to legislation introduced in the last two decades that has given the authorities new ways in which to target assets and because there does not even have to be a criminal charge or conviction for the assets to be seized.

Civil recovery proceedings can be brought by UK authorities against assets anywhere in the world if the assets are under UK jurisdiction. Cases have established that civil recovery can be an alternative if a case is not thought suitable for prosecution and that such proceedings can be brought against a corporate or individual that had no direct involvement in wrongdoing but benefited from it.

Any individual or organisation facing such action has only one realistic course of action: seeking advice from those with expertise in this challenging and highly-specialised area of law.

As a firm that was the first to take civil recovery cases to the likes of the European Court of Human Rights and the Supreme Court, we have received the highest ranking in national and international legal guides. We have been contesting POCA cases since the days when the Assets Recovery Agency and then the Serious Organised Crime Agency were bringing civil recovery actions under POCA. Their successor, the National Crime Agency (NCA), is just one of a number of authorities, including the Serious Fraud Office (SFO) and Financial Conduct Authority (FCA), which can use civil recovery to target assets.

Chambers and Partners, one of the most prestigious international legal guides, recognises Rahman Ravelli as one of the elite firms in this specialised, demanding area of law. It names our solicitors as being among the very best in the UK when it comes to acting intelligently and forcefully to defend our clients’ assets in the face of POCA actions.

The Proceeds of Crime Act 2002

It was the Proceeds of Crime Act 2002 (POCA) that removed the need for there to be a conviction in order for the authorities to confiscate assets that they believed were obtained through illegal activity. POCA, particularly Part 5 of the Act, allows the authorities to use civil recovery powers to take the assets simply by showing that on the balance of probabilities those assets are the proceeds of crime.

A UWO enables the authorities to compel a respondent to explain how they acquired assets. If the respondent cannot give what is considered to be an adequate explanation for how they came to obtain the assets legally then the assets can be considered recoverable property and proceedings can be initiated for them to be seized under POCA. The account freezing order process gives agencies the ability to freeze bank and building society accounts that are suspected of holding wealth that has a link to criminality.

Both are, as yet, new and little-used weapons. But they are starting to be used - and are just the latest indicator of how civil recovery can be used to target assets.

Civil Recovery Explained - An In-Depth Guide
The challenge posed by enforcement agencies that wish to take the assets of a corporate or high net worth individual (HNWI) is now stronger than ever. 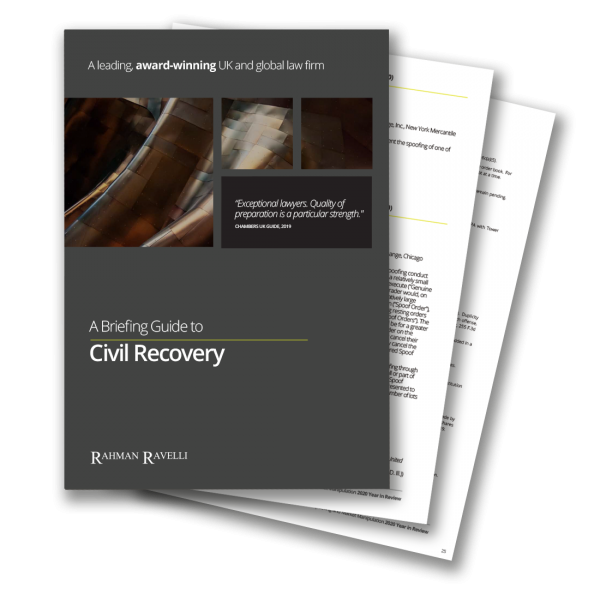 The go-to practice for civil recovery under POCA.
The Chambers UK Guide 2022

Foreign Claims and UK Jurisdiction
Syed Rahman of Rahman Ravelli assesses the doctrine of forum (non) conveniens and a court’s decision regarding jurisdiction on a foreign claim.

Cost Protections Under a Part 36 Offer
Nicola Sharp of Rahman Ravelli considers a case that outlines the possible consequences of withdrawing a Part 36 offer.

3 min read - Published Sep 2020
The Standard of Proof in Civil Fraud Claims
Syedur Rahman of Rahman Ravelli details a case that may make it easier for claimants to succeed in fraud litigation in English courts.

3 min read - Published Sep 2020
Civil Recovery: Comparing POCA to the US Approach
Rahman Ravelli outline the limitations of Part 5 of the Proceeds of Crime Act highlighted by the case of Gulnara Karimova. 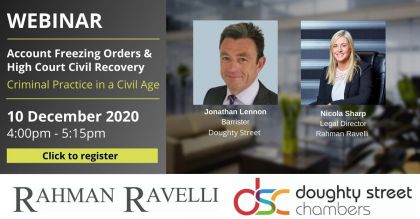