As an alternative to prosecution, deferred prosecution agreements (DPAs) involve less cost and reputational damage than a trial. Seeking one requires a bold approach and the relevant legal expertise.

Deferred prosecution agreements (DPAs) are a relatively new concept in UK law. But they are becoming increasingly important as they offer a company an alternative to prosecution for corporate wrongdoing.

Rahman Ravelli is one of a select group of legal firms to have conducted DPA negotiations. Our expertise has been highlighted in the world’s most prestigious legal guides and has made us a logical choice for corporates who are looking for the strongest possible chance of avoiding prosecution.

A DPA involves the Serious Fraud Office (SFO) or Crown Prosecution Service (CPS) agreeing to suspend the prosecution of a company for a corporate crime, provided that it meets certain conditions. These conditions could be the payment of a fine or compensation, the removal of staff, changes to working practices or assisting with the prosecution of certain individuals. If these conditions are met for a set period of time, the company will not be prosecuted. But it will be prosecuted if it fails to meet them.

Obtaining and complying with a DPA can be of great value to a company because it avoids the cost and reputational damage that prosecution, trial and conviction can bring.

Seeking a DPA requires an intelligent and sometimes bold approach in negotiations with investigators. While a DPA has the benefit of avoiding a prosecution it is important that, when agreeing on one, the company takes every opportunity to put its case robustly.

It is not easy to obtain a DPA. This is why any company seeking one needs to be represented by those with experience and expertise in this emerging area of law. Experts with in-depth knowledge of how to challenge and, when necessary, negotiate with the SFO and CPS. Solicitors who are recognised nationally and internationally for knowing precisely how to conduct a case, how to manage discussions with the authorities and how and when to hold their nerve in the face of allegations. Rahman Ravelli’s solicitors have all these attributes.

You can read more in our guide: What A Company Needs To Do To Obtain A Deferred Prosecution Agreement.

Factors Affecting the Chances of Gaining a DPA

The chances of a DPA being offered to a company will depend on factors such as whether it properly investigated the wrongdoing and if it self-reported it to the SFO. In such circumstances, the value of a properly-conducted internal investigation cannot be over-emphasised.

The extent to which a company cooperates with the SFO investigation and introduces measures to prevent any further offences from being committed will also affect the likelihood of a DPA becoming a reality.

Whether it be an investigation, self-reporting, cooperation with the SFO or introducing much-needed reforms, our solicitors know just how and when to carry out such activities in a way that will maximise the chances of a DPA being offered – and a conviction being avoided.

We have decades of experience in dealing with the SFO. And we put it to the best possible use for our clients.

In a joint letter, two anti-corruption organisations have called on the Serious Fraud Office to assess its use of deferred prosecution agreements
29 Feb 2020

Aziz Rahman helps detail the UK, US and French co-operation in the Airbus investigation for The Anti Corruption Report
23 Feb 2020

Senior Partner Aziz Rahman talks to City AM about the SFO’s approach to investigations, in the wake of the huge Airbus DPA
03 Feb 2020

What A Company Needs To Do To Obtain A Deferred Prosecution Agreement
Deferred prosecution agreements (DPAs) can be an attractive alternative to prosecution for a company that is being investigated for corporate crime. 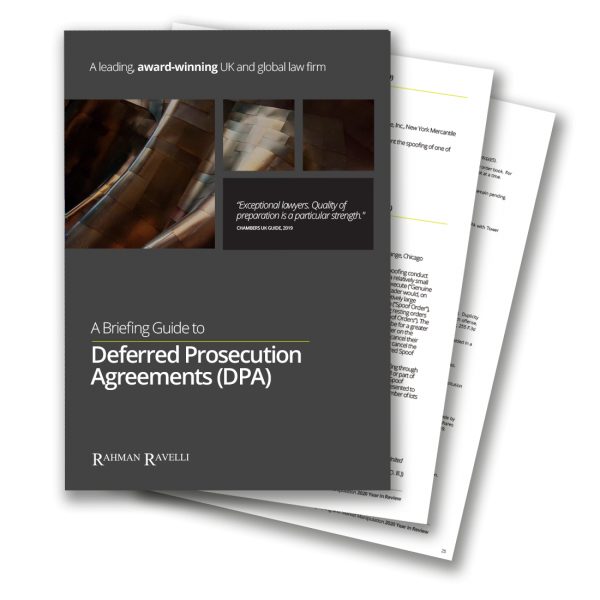 Strong, creative, resourceful and willing to go the extra mile.
The Legal 500

Deferred prosecution agreements in the US and UK
Rahman Ravelli outline the differences between DPAs in the two countries.

What corporates need to know about the SFO’s deferred prosecution agreement guidance
Nicola Sharp of Rahman Ravelli considers the Serious Fraud Office’s DPA guidance and what it means for corporates’ general counsel.