Large-scale tax evasion is higher up HMRC’s agenda than ever before. Companies, partnerships and individuals that are investigated need representation from those who regularly challenge and negotiate with HMRC.

Rahman Ravelli is recognised for being one of the top-tier legal firms when it comes to representing individuals and corporates in major tax investigations and prosecutions.

Our lawyers have the skills and the tactical acumen to secure the very best conclusion to tax matters in either a criminal or civil context. At any given time, they are involved in the most high-profile, high-value and complex national and global tax cases.

Rahman Ravelli excels when it comes to defending both the professionals and advisors who are the architects of tax schemes and the major business figures and high net worth individuals (HNWIs) who are the beneficiaries of such schemes. We represent directors, chief executive officers, chief financial officers and all other senior business individuals, financial professionals and institutions, academics, lawyers and HNWIs who may be investigated regarding tax advice they have given, tax schemes that they are involved in or matters such as pension liberation.

HM Revenue and Customs (HMRC) has a wide range of powers; including the ability to raid premises. Those investigated by it must seek representation from lawyers with years of experience in challenging and negotiating with HMRC.

Rahman Ravelli is known for its astute handling of matters in order to secure a non-contentious resolution. But we also possess an admirable track record when it comes to representing clients in contested proceedings.

The Importance of the Right Response

With the HMRC having a wide range of powers, the right response can be the difference between a prosecution being brought and the HMRC deciding not to proceed. It can ensure that any allegations are successfully challenged and then dropped. And it can be the beginning of a course of action that means the best possible outcome is obtained, however unlikely that may have originally appeared.

Advice regarding what is the right response can only come from solicitors who are experts in this field and who have vast experience of dealing with the HMRC at the highest possible levels on the most challenging tax investigations.

As a firm that has spent decades challenging HMRC on everything from tax avoidance, pension liberation and the largest MTIC (missing trader intra-community fraud) and diversion fraud cases, we are well-versed in knowing how its investigators will act – and how best to respond to them.

Tax investigations are rarely simple. They can be lengthy and complex. HMRC has a variety of penalties it can impose, from ordering the payment of unpaid tax through to handing down a fine or bringing a prosecution. An individual or organisation facing such an investigation cannot afford to treat the matter lightly. The potential penalties and long-term damage an investigation can cause make it imperative that the right advice is sought immediately.

If HMRC has reason to believe that you are not paying the right amount of tax via arrangements such as pension schemes, employee benefit trusts or other tax and investment schemes, it may open a Code of Practice 8 (COP 8) investigation to claim money it says it is owed plus additional penalties and interest. Where a serious tax fraud is suspected, HMRC may investigate using the Code of Practice 9 (COP 9) investigation of fraud procedure, whereby taxpayers are given the opportunity to explain via a Contractual Disclosure Facility all their deliberate and non-deliberate conduct that has led to irregularities in their tax affairs.

HMRC decisions can usually be appealed. This is done initially by writing to HMRC and then, if that is not successful, by appealing to the tax tribunal system.

As with all aspects of dealing with the HMRC, a strong, reasoned and well-argued case is vital if success is to be achieved.

Since 30 September 2017, companies and partnerships can be held criminally liable, under the Criminal Finances Act 2017, if they fail to prevent the facilitation of domestic or overseas tax evasion; whether or not they were aware of or involved in the misconduct.

Rahman Ravelli represents those facing such allegations. But we are also in demand for our ability to devise prevention procedures that can provide the defence to those allegations

On the following pages we explain why Rahman Ravelli is the logical choice for the person or company that requires such advice.

HMRC Tax And Vat Investigations: Using Our Expertise To Protect Your Interests
Nobody usually likes hearing from the tax man and the tax affairs of corporates and individuals can often attract the attention of HM Revenue and Customs (HMRC) for a variety of reasons. 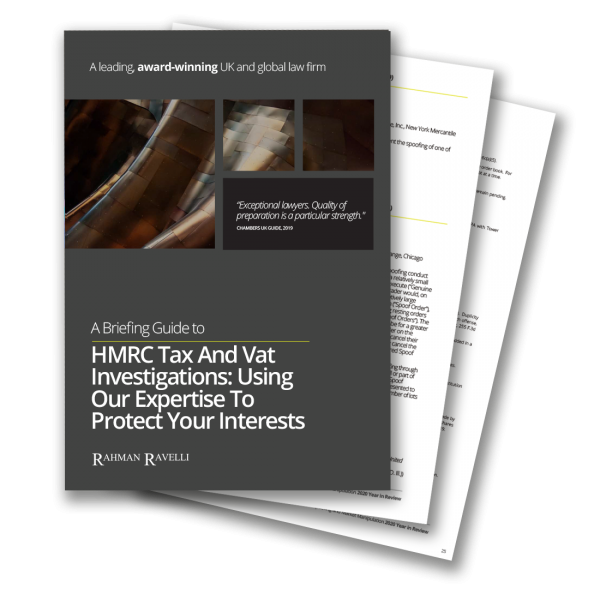 Facilitating Tax Evasion
Niall Hearty of Rahman Ravelli outlines the offences of failing to prevent the facilitation of tax evasion and the defence available to them.