To be effective, a private prosecution needs to be managed by those with comprehensive knowledge of the relevant law, strategic skills and substantial experience of the court process.

Bringing such a prosecution can be a logical alternative to relying on the police and other state enforcement agencies, such as the Serious Fraud Office (SFO) or National Crime Agency (NCA); who are often facing increasing demand on their limited resources.

It is important that a private prosecution is managed by those with all the relevant expertise.

The success of a private prosecution can hinge on the strength of the evidence that is available – and the ability to obtain it. Issues such as asset tracing can also play an important role in ensuring a satisfactory outcome. Each and every private prosecution needs to be carried out by those with in-depth knowledge of the relevant law and substantial experience of the court process for bringing such prosecutions.

For those in business who think a crime has been committed against them a private prosecution can be an effective and efficient route to justice. It may also deter others from attempting such offences in the future. This can be especially relevant in cases of fraud, where the enforcement agencies may be reluctant to commit to what can be a lengthy, complicated investigation.

At Rahman Ravelli, we have the track record and the in-depth experience and expertise of all aspects of business crime to commence, conduct and conclude a private prosecution. Our experts can assist and advise clients on every single aspect of a private prosecution: from the initial decision on whether to bring one, to gathering all the evidence and ensuring all possible options are explored and acted on to maximise the chances of success.

We work with speed and in partnership with clients to help devise the most appropriate, cost-effective prosecution strategy.

The Importance of Advice

Anyone in business who knows or believes that an offence has been carried out against them wants to see justice done. Seeking the advice of Rahman Ravelli’s private prosecution experts will mean you receive the very best advice on whether a private prosecution is the right course of action for you.

A bespoke team of expert professionals will be assembled to analyse the issues that require investigation. These issues will all be discussed with you fully before any decision is made regarding whether to bring a private prosecution. If a private prosecution is suitable, we will outline the best way to proceed. And if your situation is not considered appropriate for a private prosecution, we will explain in clear detail the other options that may be available, such as involving the authorities or bringing a civil action to recover what has been lost.

Speaking in general terms, if a crime has been committed in the UK, the alleged offender can be identified and is UK-based and evidence is available, there is the possibility of bringing a private prosecution. A civil action could be brought against the offender to recover what they obtained through the offence. But if the offender has no assets to meet such an order, a civil action would not be worthwhile. And if the state’s enforcement agencies have decided against bringing their own prosecution, a private prosecution is the most obvious way to bring the offender to justice.

We have offered advice on such matters to every type of national and multinational business, a wide variety of organisations and many high net worth individuals. Our advice is geared to ensuring that if you bring a private prosecution it is the right thing to do – and that every step of it is carried out correctly.

As a firm that is recognised for being on the cutting edge of white collar crime around the globe, we provide the insight and direction that will enhance your chances of success.

Private Prosecutions: Putting Justice In Your Hands
Rahman Ravelli has been recognised worldwide for its ability and achievements in the fields of serious and white-collar crime. 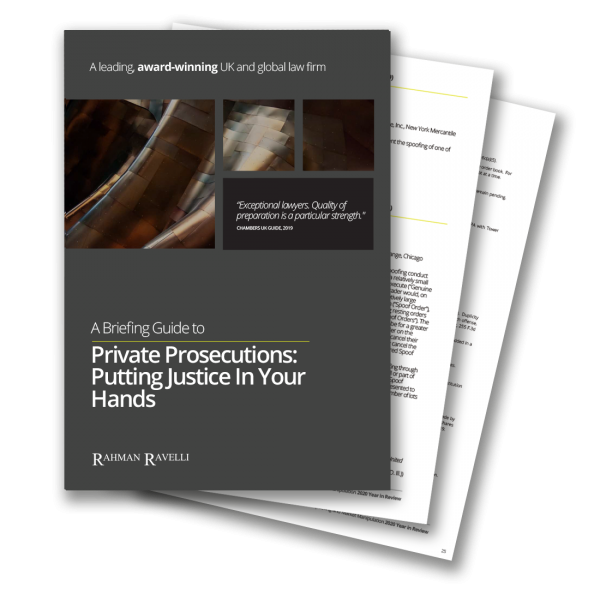 This is a very hands-on firm that provides the five-star treatment to the client.
The Legal 500 2022

Private Prosecutions: The Issues
Niall Hearty of Rahman Ravelli details the matters that have to be considered when deciding whether to bring a private prosecution.

The Pros and Cons of Private Prosecutions
With the use of private prosecutions on the increase, Niall Hearty of Rahman Ravelli considers the advantages and disadvantages of them.